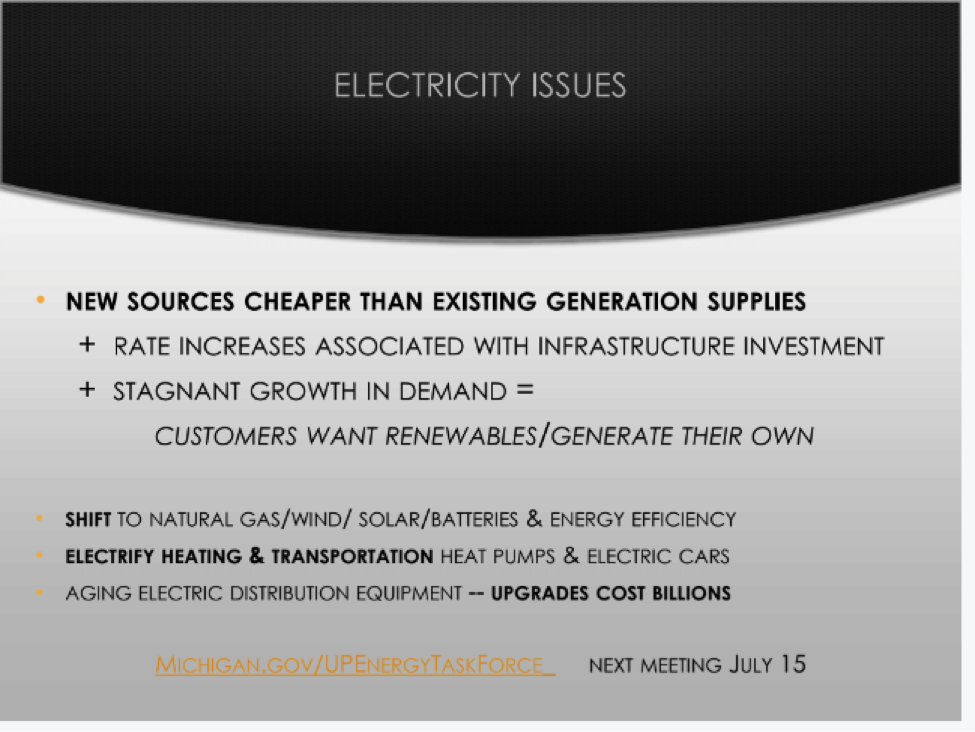 The Upper Peninsula Energy Task Force turned its attention in May and June meetings to studying the grid that delivers electricity to homes and businesses in the UP – the power generation assets (power plants, etc.) and the transmission and distribution lines that crisscross the peninsula. This work encompasses the second charge in Executive Order 2019-14 from Governor Gretchen Whitmer for the task force: “to formulate alternative solutions for meeting the region’s energy needs, with a focus on security, reliability, affordability and environmental soundness. “ The task force must submit its report on overall UP energy issues and alternatives to Gov. Whitmer by March 31, 2021.

The task force needs to consider the broader energy picture in order to take on a fascinating but difficult question: Should the UP invest more into its aging existing energy infrastructure (such as, for example, Line 5) and take on the heavy costs that would entail, or should it embrace a new approach that disrupts the current system but also has its own risks?

That disruption – which would involve electrifying things like heating, and powering them with more renewable energy – could pay off in the long-term but would be a daunting change in the short-term. In addition, weatherizing homes and buildings, upgrading their appliances, improving their lighting and a host of other energy efficiency measures, would enhance quality of life through lower electric bills for many UP residents who tend to be older, have fixed incomes and live in buildings that lack today’s energy saving measures.

The basic idea behind this approach (which, to clarify, is not a formal proposal, just one scenario being looked at) is laid out in the above slide from a presentation that CUB board member (and Marquette Mayor Pro Tem) Jenn Hill has been giving to local groups in the UP.

As the first half of the task force’s work investigated, approximately 20% of UP households are reliant on propane for heating and are especially vulnerable to potential disruptions to this fuel supply that could cause propane prices to spike. In April 2020, the task force completed its first charge and sent to the governor its recommendations on improving propane access in the UP, including what policy changes, transportation options and infrastructure investments could buffer these shocks. Meeting presentations and the full report with appendices are posted at Michigan.gov/UPEnergyTaskForce.

But even if alternatives to Line 5 for propane are developed, the UP electricity and heating systems will still be reliant on fuels that historically have volatile prices. That risk of volatility is coupled with the electricity rates UP residents pay – some of the highest in the nation.

Those bills could go up further, because the region also has a distribution grid in need of upgrades, which can cost billions of dollars. Distribution and transmission lines are particularly expensive on a per-customer basis for the UP due to its low population density, meaning you have to build relatively more infrastructure to connect relatively few households or businesses.

But those same challenges to the distribution grid are also reasons why alternatives to the centralized electric grid might be particularly ripe for the UP. Distributed energy resources – solar panels backed by lithium-ion batteries to store energy and more – can produce energy at the site of consumption, without the need for distribution or transmission lines (as we discussed previously, there are proposals for fairly big battery storage projects in the UP.)

Of course, distributed energy is not a replacement for the grid – you still need the grid as a failsafe, but the more energy consumed on-site as opposed to traveling through wires, the more you reduce electricity congestion, which ultimately means lower costs for the grid.

That brings us back to propane. Those lower costs can then make alternatives to propane more feasible. If the electric bill is not as oppressively high, customers can better explore electrifying things in their home. Electrification entails, among other things, switching from fossil fuel-burning sources for heating to heat pumps that run on electricity. Heat pumps have historically been a very expensive option, but costs have been coming down due to innovation, making heat pumps potentially economically feasible even in cold climates.

This is an ambitious vision, but the task force, by all accounts so far, is not married to any one approach. The task force’s next meeting is on July 15, and it is expected to examine this issue of electrification in more detail. To stay informed of Task Force actions, send an email to [email protected]