Video Available for Michigan PSC Conference on Reliability and Outages

Posted by Citizens Utility Board of Michigan 0sc on November 02, 2021 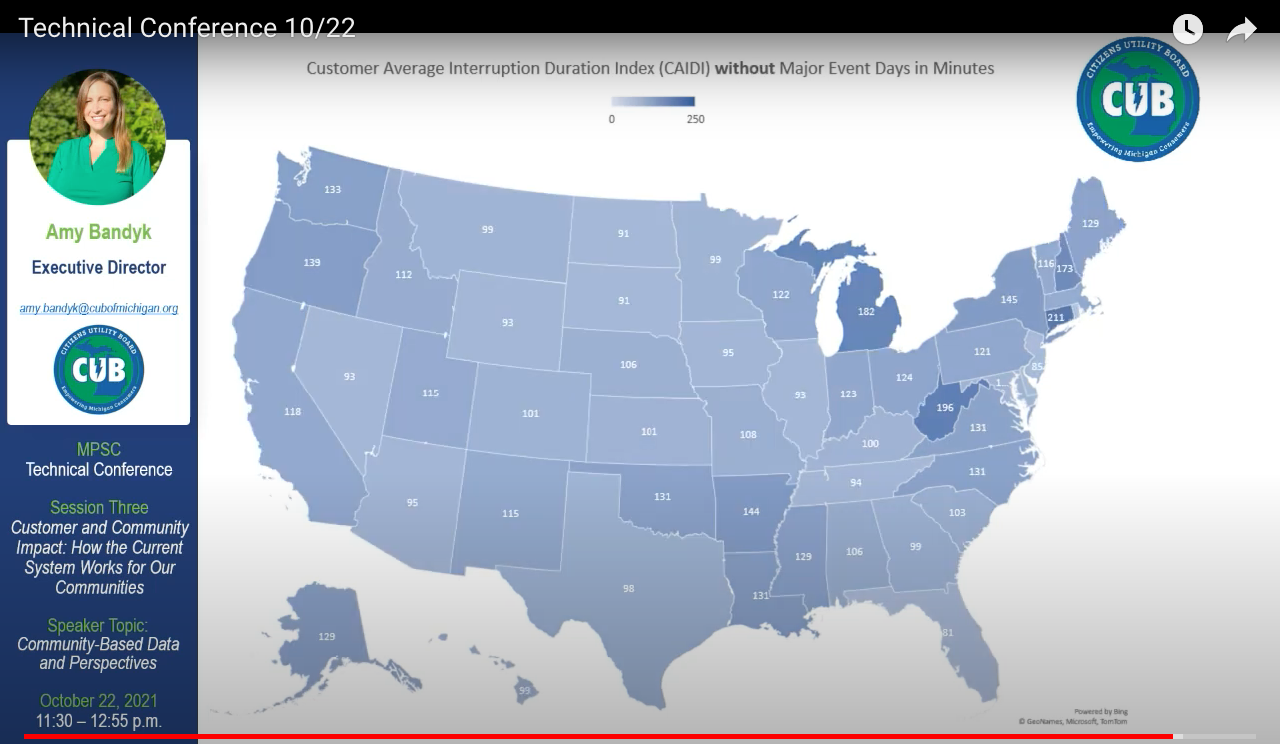 The MPSC held a technical conference on Oct. 22 that provided a diverse range of perspectives on the electric reliability problem in Michigan, and what to do about it.

The conference also included a presentation from CUB of Michigan Executive Director Amy Bandyk, who gave a preview of our upcoming 2021 Utility Performance Report, the latest version of our annual series. The report will be out soon enough, but the basic takeaway is that Michigan utilities continue their trend of poor reliability performance and high electric bills for customers, compared to utilities around the country.

Amy talked about several recommendations CUB has for dealing with this reliability and affordability crisis, including obtaining more data on the economic cost of outages for customers and then putting that data to use. “If the staff, with the help of stakeholders, can figure out how to use this data to determine where the costliest outages are, especially for customers with the least means to cope with long outages, that information could be invaluable as a leading indicator for utility distribution grid planning,” Amy said. “It could show us where scarce ratepayer dollars that fund tree trimming, equipment upgrades and replacements, should be directed to alleviate the most economic pain felt by customers.”

Other presenters at the conference echoed CUB’s argument that Michigan customers pay high rates for poor reliability. “Michigan customers get C- service, but pay A+ rates,” Michigan Assistant Attorney General Michael Moody said in a presentation about how AG Dana Nessel’s office has been approaching the power outage issue. For example, the AG is supporting the idea of requiring utilities to contribute to a disaster relief fund that would provide monetary support for customers who lose power. 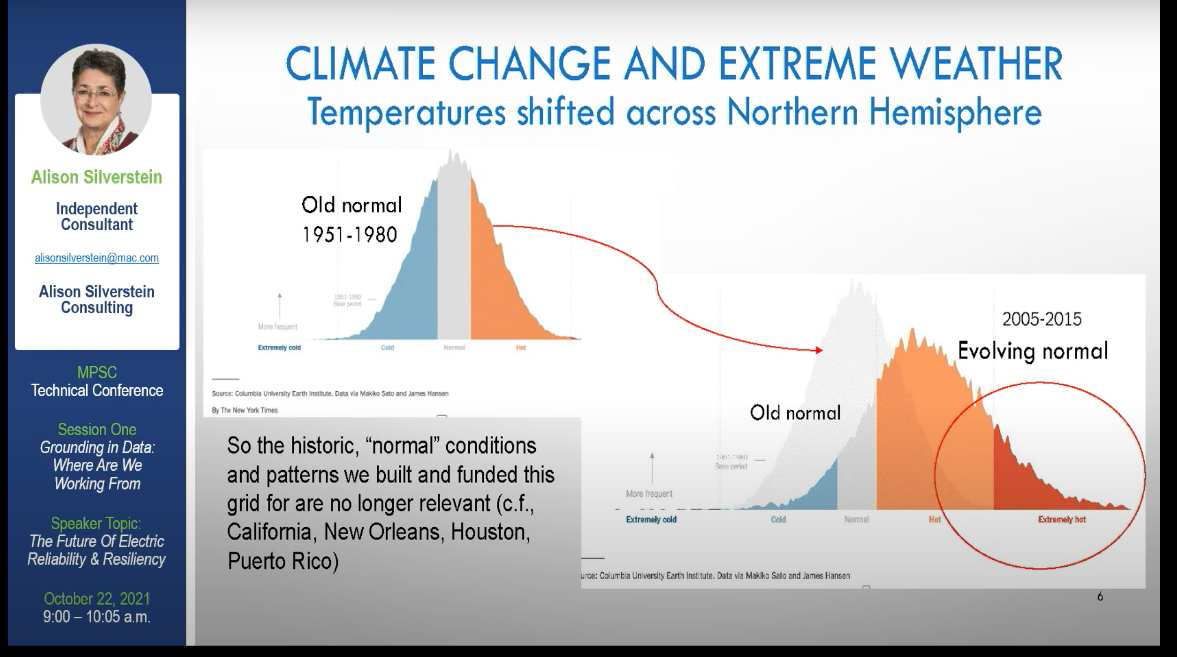 The need for such a fund is becoming more and more pressing due to changes in weather patterns. Energy consultant Alison Silverstein spoke at the conference and presented the distribution of temperatures from the “old weather” patterns of 1951 to 1980 to the “evolving normal” of 2005 to 2015. The latter had significantly more extremely high temperatures observed.

“All of our design parameters are oriented around the ‘old normal’,” Silverstein said. “We are using historical data and some of our distribution standards were based on 1900s railroad industry weather data that was bizarrely transposed for the electric industry. What that means is we built the grid for ‘Ozzie and Harriet’ weather… and we are now facing ‘Mad Max’ in terms of our assets and what we have to deal with.”

A panel at the conference featured several representatives of different communities that are all dealing with challenges when it comes to the grid. “This summer has capped off a 15-year problem we have had with DTE,” Farmington Hills Mayor Vicki Barnett said. Her city’s emergency dispatch was overrun with calls during one of the worst power outages this July, and compounding the problem was that some of the maps DTE was using to determine locations on the local grid were “woefully inaccurate,” she said, further delaying restoration.

Due to the high population concentration, suburban and urban areas in Metro Detroit often get the most attention when the power goes out, but customers in rural areas often face the most challenging reliability problems, Fred Lewis, supervisor of Plainfield Township in Iosco County, said in the panel. The power goes out more often in his area than in cities,and in many cases no power means no water either, Lewis explained.

Also in that panel, Sherri Vainavicz of Heart of West Michigan United Way talked about impacts on customers who turn to calling 211 to find out what is happening when the power goes out because they cannot access the Internet, and Lt. Jeffery Yonker of Michigan State Police gave the law enforcement perspective. During power outages, “utilities are telling us to direct customers to the website. Well, they can't go to the website,” Vainavicz said.

The conference also featured remarks from the MPSC staff and Commissioners Katherine Peretick and Tremaine Phillips. View video of the technical conference and the presentations here.