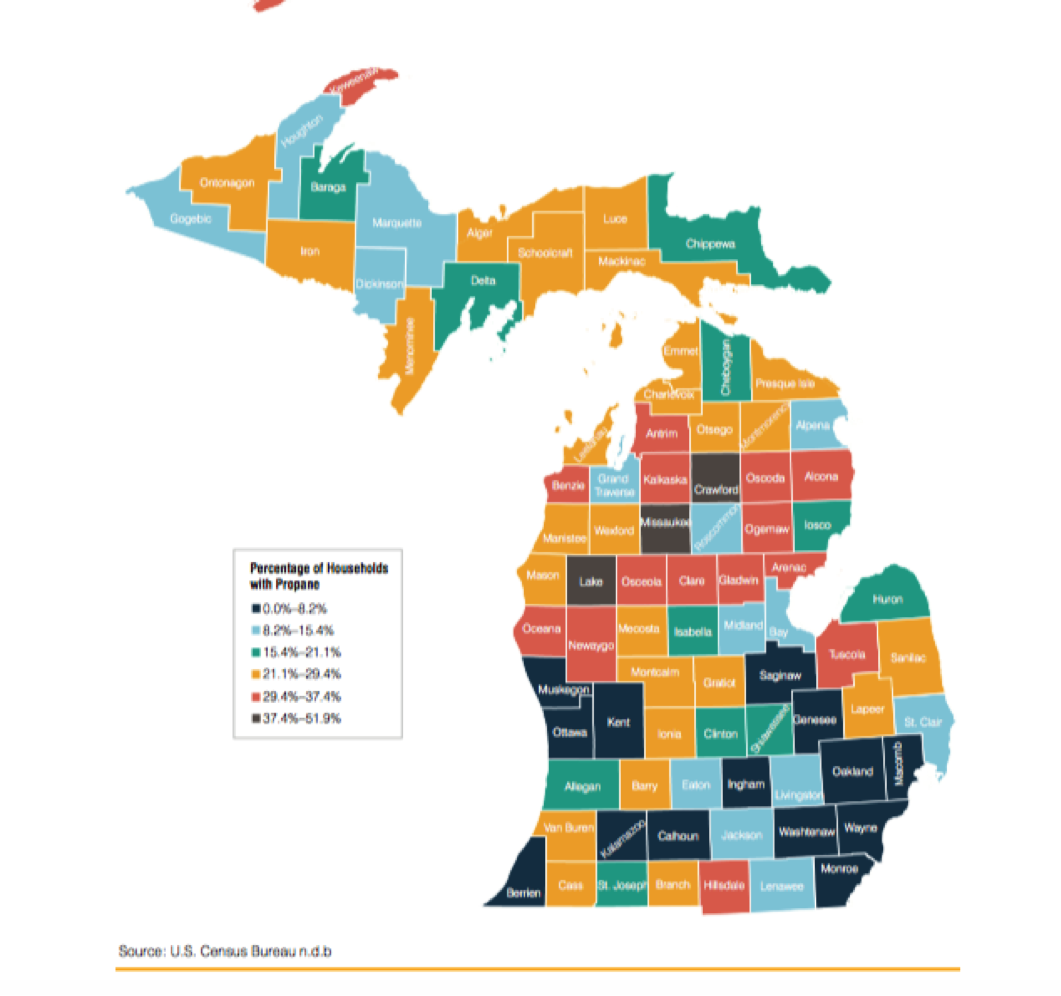 The developing coronavirus crisis shows how everyday life can be upended by low-probability events. In energy, people are always talking about the importance of “resiliency.” Resiliency essentially means a system’s ability to respond to many different shocks. Events with relatively low probabilities often create the biggest system shocks.

That brings us to the state of Michigan’s Upper Peninsula Energy Task Force and its work examining how fragile the UP’s energy system, especially the propane widely used for heating in harsh winters, is to a supply shock. A draft version of the task force’s first report on ways to deal with a shock to the propane market in the UP is now available. This is the first of just two reports the task force will put out. Read about why the task force was formed last summer, and the pipelines the group is examining, as explored in previous blog posts by CUB.

While the potential impacts of a propane supply disruption are not nearly as serious as the potential consequences from the current crisis, the similarity is that they both can put strains on an economic system in a way that exposes weaknesses. In the case of the UP, the weakness is that UP residents are disproportionately reliant on propane, a fuel that has limited avenues of supply to the region – primarily, the controversial Line 5 pipeline – and is heavily affected by a global market, making the region highly susceptible to price fluctuations.

Exactly how bad would the situation be if Line 5 shut down, especially in the case of a severe weather event like another polar vortex where temperatures drop more than 20 degrees below zero? The report, completed by a consulting firm with oversight by the members of the task force, found that the scenario of a Line 5 disruption would increase costs by to about 75 cents per gallon, compared to an average of around 60 cents per gallon observed at Rapid River in the summer season when tanks are primarily filled in preparation of the winter.

For context, from 2018 to 2019 , wholesale propane prices hovered somewhere under $1 per gallon. In the past, the price has spiked in reality even more than in the Line 5 disruption scenario - during the major polar vortex of 2013 to 2014, prices approached $4 per gallon, last seen before that in 2011. * But if a polar vortex were to happen combined with a Line 5 disruption, the situation gets more daunting. Severe weather boosts the costs of the Line 5 scenario by about 20%, the report found.

But severe price increases, straining the wallets of UP residents, are not inevitable. There are a number of ways to mitigate the effects of a propane supply crunch, according to the report.

First, a big part of the answer to the UP’s propane supply issues is sitting at the homes of thousands of residents around the peninsula: the tanks used by customers. Coordinating people to fill their tanks in preparation for the heating season would be a good idea, according to the report. “With more than nine million gallons of customer storage, and 1.5 million gallons of commercial storage in the Upper Peninsula, simply having all residential and commercial tanks filled at the beginning of the heating season would significantly increase the Upper Peninsula’s reserve margins and buffer it against potential disruptions,” it said.

Second, the report identifies “a number of robust and diverse alternative supply options for delivery to the Michigan market.” These include sourcing propane directly from Edmonton, Alberta (a major supply hub), and transporting it via rail to Michigan, or sourcing from propane terminals in several neighboring states and transporting it via several different options including truck.

Specific recommendations being considered by the task force include:

Members of the public will have until April 6 to comment on the draft report.