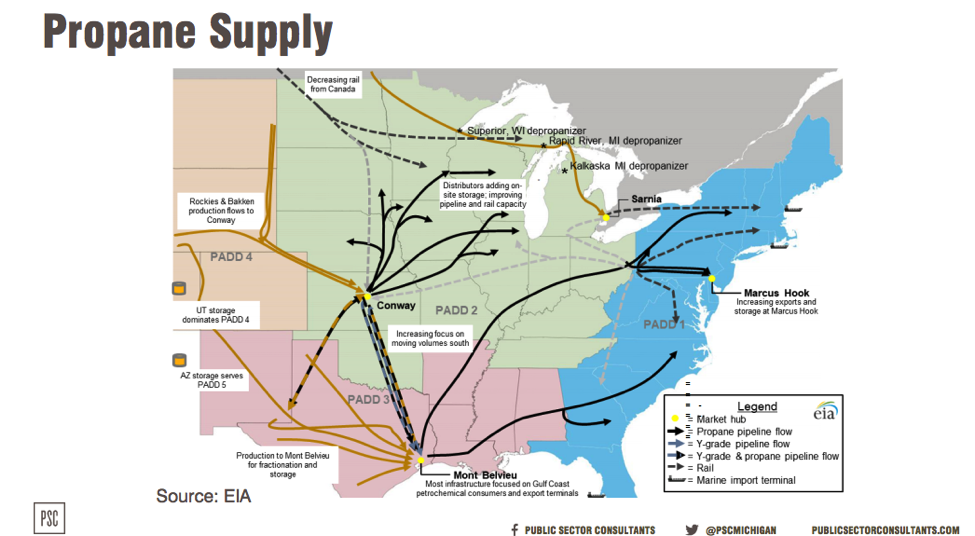 The debate over the future of the Enbridge Line 5 pipeline has been one of the biggest energy and environmental stories for Michigan over the past couple years. The Line 5 controversy was one of the contributing factors in Gov. Whitmer’s decision last summer to form the Upper Peninsula Energy Task Force to examine how the energy-constrained region can confront a number of challenges while keeping heating and power prices under control, including the potential closure of Line 5.

But Enbridge’s Line 1 pipeline also has big implications for the supply of propane to Michigan. In fact, a disruption of Line 1 would likely have a bigger impact on Upper Peninsula propane supplies than a disruption of Line 5, according to a preliminary report by Public Sector Consultants, presented to the UP task force’s recent meeting on Feb. 7 in St. Ignace. Public Sector Consultants is working on the report on propane that the task force must submit to Gov. Whitmer by the end of March, followed by a broader report on how to avoid an energy crisis in the UP, due by the end of March 2021.

Line 1 runs through Canada and Minnesota to Superior, Wisc., where Line 5 branches off and continues through Wisconsin, the UP and the Lower Peninsula, ending at Sarnia, Ontario, just across from Port Huron, Michigan. A Line 1 disruption would cut off somewhere from 85% to 99% of propane to the UP, compared to somewhere from 65% to 90% from a Line 5 disruption, Public Sector Consultants’ preliminary results found.

The difference has to do with the Superior, Wisc., depropanizer (which isolates propane from other gas compounds), where Line 1 ends and Line 5 begins. About 25% of the propane used in the UP is produced at Superior, while 65% comes from Rapid River, a depropanizer facility on the route of Line 5 in the UP.

A disruption on Line 5, but not Line 1, would leave Superior still functioning as a supply of propane, and alternatives to Line 5, such as trucks, could be used to get propane from Superior to the UP. That option of trucking propane into the UP in the event of a Line 5 disruption is one of the Line 5 alternatives that the task force is discussing, according to the minutes of a recent task force meeting.

Another way to make the UP more energy-resilient would be to use the state’s buying power to create a kind of safety reserve of propane. An option the task force is considering, according to task force member and Marquette Mayor Pro Tem Jenn Hill (also CUB secretary), would build off the annual bulk purchase of propane that the state of Michigan currently makes for parks. The state would buy more propane than usual, and set aside that additional propane as a reserve to give to retail propane suppliers to ease the supply crunch that can happen during the long, cold UP winters.

For more discussion of UP propane issues and the task force, a public meeting is taking place at Portage Lake District Library in Houghton on Saturday, Feb. 22, from 12:30 pm to 2:30 pm.