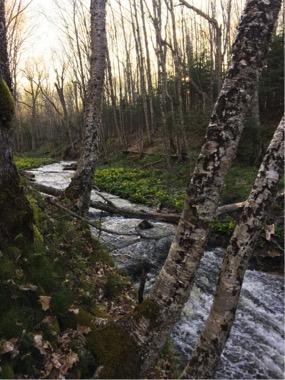 The Upper Peninsula Energy Task Force’s second meeting (read our blog post about the first) was held in St. Ignace, Mich., on Aug. 5, just a stone’s throw from the Mackinac Bridge and the Straits of Mackinac. Under those waters is the Enbridge Line 5 pipeline, whose cloudy future is one of the big reasons Gov. Whitmer created the task force in the first place.

The task force has just seven months before it needs to submit an interim report dealing with the UP’s heavy use of propane for heating. The extent to which UP households depend on propane has been tough to nail down. A large minority of homes in the UP are only occupied seasonally – such as summer lake homes or hunting cabins. That means their heating demand can be unpredictable – they might be dormant for much of the cold season, but demand may suddenly spike around hunting season in November, for example. Other challenging issues are older housing stock needing efficiency upgrades and understanding demand when one home has multiple fuel sources (propane, wood and electric), according to one of the 19 appointees to the task force, Marquette City Commissioner (and CUB of Michigan board member) Jenn Hill.

At the St. Ignace meeting, the task force heard from the Michigan Propane Gas Association and made a deep dive into the local propane gas market: how the UP gets propane, where it comes from, the costs of that supply chain and how Line 5 fits into it all.

The UP has two primary terminals at which it receives propane. The first is from Line 5 itself. At Rapid River in the central UP, a chemical facility known as a fractionator processes natural gas liquids from Line 5 into propane. The other is the Kincheloe gas storage facility in the eastern UP near Sault Ste. Marie, which receives gas from western Canada by rail.  In addition, UP propane retailers also travel to terminals in Wisconsin and the large storage facilities in the lower Peninsula to meet UP demand depending on the price. In the final presentation of the day, Michigan Public Service Commission staff, identified dependency on trucking (having enough drivers and cold, stormy weather impeding delivery) and adding more rail terminals and storage facilities in northern Michigan as critical resiliency and cost factors for more study.

The Kincheloe and the Rapid River facilities are owned by the same company, Plains All American Pipeline, leading to concern among some task force members that propane delivery in the UP might have qualities of a monopoly.

Too few fuel providers is a problem, but the larger problem is too few fuels. Liesl Eichler Clark, Director of the Michigan Department of Environment, Great Lakes & Energy (EGLE), pointed out that the UP increasingly uses the same fuel for both heating and electricity – natural gas. The Presque Isle coal plant, which recently provided a strong majority of the UP’s electricity, retired earlier this year, and it has been replaced by natural gas-fired power plants.

The next meeting of the task force will be Sept. 20 at a location yet to be announced. Follow updates on EGLE’s UP Energy Task Force webpage.