Posted by Citizens Utility Board of Michigan 0sc on August 23, 2022 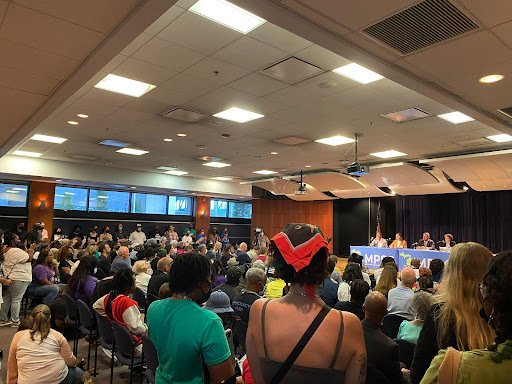 The Michigan Public Service Commission’s (MPSC) Aug. 22 hearing in Detroit was a rare opportunity for DTE residents to express their frustration with paying high rates for electric service that is only getting more and more unreliable in the face of worsening severe weather.

DTE customers did not let that opportunity go to waste, as the tension was palpable in the hearing room at Wayne State Community College in downtown Detroit where the three MPSC commissioners heard comment after comment from the standing-room-only crowd that spilled out into the hallway. The hearing was a bit freewheeling—interruptions from the audience were common, and speakers did not necessarily stick to the imposed order or time limits (a plea from the stage to “Please be quiet so the court reporter can record the comments,” was met with an immediate “No!” from an audience member, for example).

But the urgency to be heard is understandable given what DTE customers have been through. Members of the public who approached the podium recounted their experiences of losing power for hours or days when the temperature is over 90 degrees, being driven to financial stress by rising electric bills and much more (many of the individual comments have been chronicled in this Twitter thread by Byron Keys on behalf of Detroit Documenters and by the Michigan League of Conservation Voters’ Twitter account).

There was a sense of enough is enough, and that DTE’s latest requested rate increase (8.8% for residential customers) is one step too far. “Compare that to the 4.1% increase they're asking from their industrial customers,” CUB of Michigan President Keith Cooley said in an interview with Michigan Radio. “Our question becomes, what's with the residential ratepayers? Why do they have to pay almost double—actually more than double? It makes no sense.”

“The pendulum has shifted in the wrong direction,” Frank Zaski, a CUB member and DTE customer, said in his comments to the MPSC at the hearing, noting that over the last 15 years, rates for low-usage residential customers have almost doubled, increasing by 10 cents per kWh, while rates for large industrial customers have gone up only half a cent. In addition, in 2007, low-usage residential ratepayers paid only 3 cents per kWh more than the large industrials. Now, the disparity is 13 cents.

U.S. Rep. Rashida Tlaib (D-Mich.) gave powerful testimony at the hearing. The statutory responsibility of the MPSC is to ensure rates are “reasonable,” but what has been happening to her constituents is far from reasonable, she said. Tlaib cited the reporting from ProPublica and Outlier Media that revealed DTE shut customers’ power out 80,600 times in 2020 during the pandemic, all while increasing its profits (also check out ProPublica and Outlier Media’s more recent reporting on DTE’s practices selling customer debts to aggressive collection companies).

Tlaib pointed out that it will be up to the MPSC to decide what amount of DTE’s proposed rate hike is “reasonable and prudent.” If the MPSC does not take decisive action in response to the unprecedented level of customer outcry, the need for action by the state legislature on several bills introduced in Lansing by state Reps. Abraham Aiyash and Yousef Rabhi (who also spoke at the hearing) becomes even more important.

DTE's current rate case before the Michigan Public Service Commission is Case U-20836.