Will New Regulations To Help Customers With Power Outages Get The Job Done? 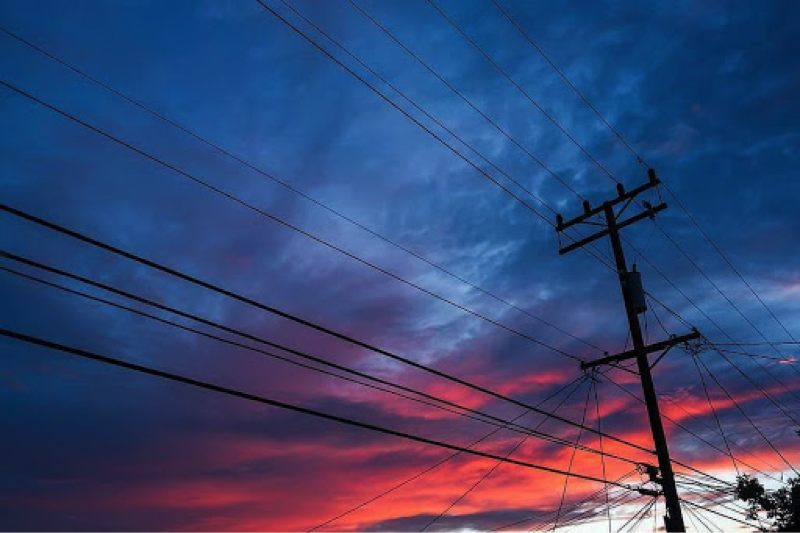 It’s been about a year and a half since Michigan’s “wake-up call” moment for electric reliability: a summer 2019 day of devastating thunderstorms that led to catastrophic losses of power across the service territories of DTE and Consumers Energy. The incident focused attention on the Michigan utilities’ generally poor performance when dealing with power outages and the need for a regulatory solution. Now, the Michigan Public Service Commission (MPSC) is close to finalizing new standards for service quality for electric utilities. That includes, most prominently, the bill credits that are due to customers who experience prolonged outages (More background here, and also check out this paper from March 2020 which goes into much greater detail on ways to improve reliability in Michigan).

Last month, the staff of the MPSC put forth its final report with recommendations to the MPSC for revising these standards, and the results are mixed. In some aspects, the staff’s suggestions would improve the existing rules by leaps and bounds. But in other ways, the changes are deficient and could go farther in ways that would significantly help Michigan’s utility customers.

Any improvement on the status quo is welcome, but whatever the MPSC approves now may be all Michiganders get for a long time (the service quality standards were last substantively updated in 2002). The staff’s recommendations represent a rare opportunity, therefore, and it would be a mistake to settle for only marginal change.

Before we dive into the good and the bad from the staff’s final report, it is important to consider that the impacts of poor electric reliability are not abstract. They affect the lives of real people. The human side of the story is expressed by comments submitted to the MPSC by several people from communities that are hardest hit by power outages. One comes from Zakia Gibson, chief education officer of the public school district for Highland Park, a small city with high poverty rates surrounded by the city of Detroit, and where frequent outages disrupt the classroom, Gibson writes. “Without power and a Wi-Fi connection, students have no means to connect with their teachers and learning process,” she said. “Students are already behind because of the pandemic, the difficulties of online learning, and the struggles of living in a low-income community. If they are disconnected, they are not learning, and falling even further behind.”

Elsewhere, comments joined by Gibson, over 100 residents of Detroit, Highland Park, and other communities and 14 organizations emphasized how a power outage that causes groceries to spoil can be a devastating blow. Other residents made this point as well. “I have thrown out more than one fridge full of food, and never once been compensated for my loss of service, never mind the cost of my groceries, even when outages extended for several days,” Southwest Detroit resident Kathryn Savoie said in comments sent to the MPSC. “This is inexcusable, and DTE must do better.”

Are the MPSC staff’s recommendations strong enough to lead to better results for these communities, as well as all other Michigan utility customers?

First, the good: the staff endorsed the principle that the longer the outage, the greater the credit—a big departure from the way the standards have worked since around 2002, in which a customer receives a flat $25 credit off their electric bill, regardless of how long the power was out. Under “normal” grid conditions, for any outage over 16 hours in duration, whether it lasts 16 and a half hours, or 100 hours, the customer is due $25. (The service quality standards have different thresholds for what is considered unacceptable service based on how many customers lose power in an event. “Normal” grid conditions mean 10% or less of the utility’s customers lost power in the event, while mass outage events where over 10% lose power are dubbed “catastrophic” conditions. The minimum outage length to qualify for a credit under catastrophic conditions is 120 hours. But still, the credit is only $25.)

The staff’s report shows a big evolution from where things started at the beginning of this process. In stakeholder meetings early last year, the staff flatly rejected the Citizens Utility Board (CUB) of Michigan’s position that the credit should be hourly. But through persistence throughout the stakeholder process, we appear to have influenced the staff. Their report also recommends increasing the base credit to $35 from $25 to account for inflation. “Staff’s recommendation is a compromise of the two approaches, as it automatically adjusts the amount for inflation and adds an additional incentive of $2.00 per hour of outage for the utility to limit outages well beyond the established ‘unacceptable’ thresholds,” the final report said.

CUB put forward the idea of a $2 per hour of outage credit in comments submitted to the MPSC. This number is based on Lawrence Berkeley National Laboratory research that estimates the value of electric service based on customer willingness to pay. This is an imperfect measure because electricity is not equally valuable to all customers—for example, some customers cannot afford to temporarily relocate to a hotel or easily replace groceries, so electricity will be more valuable to those customers compared to customers with more resources. Therefore, the $2 per hour credit should be seen as a baseline that can be adjusted upwards to account for these differences in willingness to pay at another time.

Also, the staff embraced the requirement that utilities should automatically distribute credits to customers who qualify, rather than placing the onus on the customers to demand the credit to which they are entitled. If you are reading this, you probably didn't even know you may have been eligible for credits that cut your electric bill. As CUB has discussed several times before, the rate of customers who actually claim their credits has been historically very low—probably due to a combination of lack of awareness among customers and the paltry dollar value of the credits themselves (See page 11 of CUB’s paper).

But now the less positive: If adopted by the MPSC, the staff’s revisions would still put in place a high barrier for customers to be eligible for credits. The $2 per hour only applies after a certain number of hours has elapsed. For example, a customer only begins collecting the hourly credit after their power has gone out for over 16 hours, under normal grid conditions. The $2 hourly credit would not apply until the 17th hour of the outage. At 16 hours, the customer only receives the flat $35 credit. 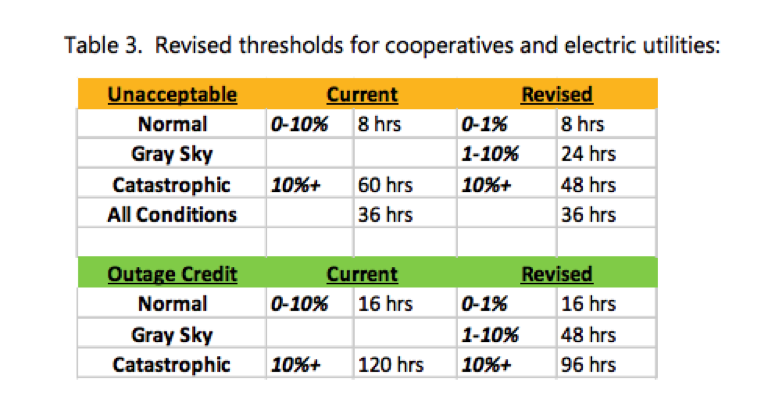 Image from Staff Final Report: Service Quality and Reliability for Electric Service U-20629.

This proposal is inconsistent. When the power goes out, there is a cost to the customer, and the costs grow the longer the power is out. The power being out for one hour isn’t as big of a deal as it being out for four hours, and four hours isn’t as big of a deal as eight hours. That is why CUB argues that setting the credit at $2 per hour is a simple, easily understandable solution. The staff’s counterproposal, on the other hand, sets up arbitrary thresholds that treat a sixteen-hour outage the same as a one-hour outage—or, in the case of catastrophic grid conditions, a 96-hour outage the same as a one-hour outage.

Michigan is already one of the worst states for electric reliability. The goal should not be to cut power outages down to 16 hours or another arbitrary threshold, but to reduce the amount of time customers are without power as much as possible.

Again, the staff’s proposal is a substantial improvement on the status quo. But it does not give the utilities as strong of an incentive to reduce outages and cut power restoration time as it could. With a few simple changes, like adopting $2 per hour as the credit without any kind of arbitrary threshold, the commission could make the new standards much more robust.