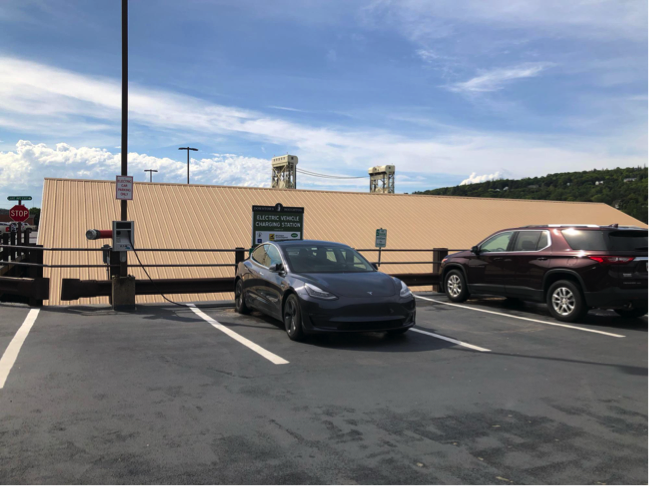 An EV charging station at a parking deck in Houghton, Mich. Source: Plugshare.com

It has been almost an entire summer since we checked in on the progress of the Upper Peninsula Energy Task Force, which, after delivering its report on propane supply and alternatives to Line 5, is now about six months away from a final report on much broader energy issues facing this unique part of Michigan. For this second phase the task force is asked by the governor to “formulate alternative solutions for meeting the UP’s energy needs, with a focus on security, reliability, affordability, and environmental soundness.”

This mission has led the task force to investigate issues related to electricity generation, transmission, transportation and more, which are all related to potential disruptions to the current energy system for the region, be they weather-related, commodity-related, or stemming from a shutdown of the Line 5 pipeline.

Case in point: what would it take for electric vehicles (EVs) to become a prominent, or even the primary, mode of automotive transportation in the UP? A Sept. 14 task force meeting with presentations from Cloverland Electric Cooperative CFO Aaron Wallin and 5 Lakes Energy Managing Partner Douglas Jester (also himself a member of the task force) had some interesting answers to that question.

EVs could be part of the path to achieving that “environmental soundness” goal. Unlike gasoline-burning vehicles, they produce no direct emissions, and while the electricity they run on is often generated by high-emissions sources, researchers have found that EVs still typically produce less overall emissions than internal combustion vehicles, even after accounting for how the electricity they run on is produced. That lower emissions profile would only improve if the additional demand for electricity from higher EV usage was met by more renewable energy (for more on how propane, Line 5, electricity generation and renewable energy in the UP all fit together, see the first post in this blog series).

In addition, since they have batteries that store electricity, EVs could also help with the reliability part of the task force’s goals. As has been demonstrated in a few places, those batteries could be tapped when the EV is plugged in to smooth out the ups and downs of renewable energy production or provide other services for the grid.

There is also an economic case for this transition: the UP currently spends almost $370 million annually on motor gasoline, according to an analysis by 5 Lakes Energy that Jester presented at the Sept. 14 meeting. That comes to a cost of 12 cents per mile driven. If all those vehicles burning gas were replaced with EVs consuming electricity, the analysis found that the annual spending on electricity to operate those EVs would be $39.3 million, or 5 cents per mile driven—substantial savings from the current state.

But there are three major barriers to EV adoption: first, there is the upfront cost of acquiring the vehicles. EVs tend to be more expensive to buy than conventional vehicles. Second, to be driveable EVs require a buildout of charging infrastructure—not just a network of accessible charging stations, but also fast chargers that can fully charge a battery in a matter of minutes, not hours. As Jester said, people “can’t go on road trips if it takes hours to charge.” EV infrastructure is particularly lacking in the UP. In general, “Michigan has the most utility (EV) infrastructure investment in the Midwest,” Michigan Department of Environment, Great Lakes and Energy (EGLE) Director Liesl Eichler Clark said in the meeting. But “that looks different in the UP in particular.”

The third reason is particularly potent in the UP, one of the coldest parts of the continental U.S. The freezing cold hurts the efficiency of EV batteries, decreasing the range of affected EVs. “The battery performance in cold weather climates… has hindered the switch to EVs,” Cloverland’s Aaron Wallin said in the meeting.

But despite those difficulties, “EVs are coming,” Wallin acknowledged, and utilities and co-ops serving the UP need to get ready. Jester cited projections suggesting that by 2025, EV models that have lower upfront costs than equivalent vehicles with internal combustion engines will emerge.

If forecasts from Bloomberg New Energy Finance, the International Energy Agency and others are broadly correct, EVs will capture a substantial share of the vehicle market over the next decade or so. In such a scenario, the UP will need to solve the EV infrastructure problem if it wants to keep its tourism economy running smoothly. EV owners will not make the long drive to visit the UP if there is nowhere to charge (or, there is nowhere that can charge in a reasonable amount of time).

At the same time, EV infrastructure is just one of many facets of a potential transformation of the UP energy system that the task force is examining. Other facets discussed in the meeting include the electrification of building heating systems, simplifying the land acquisition process for the siting of renewable energy projects, and the division between cooperative utilities and investor-owned utilities. “We need to decide as a team - what is it we want to prioritize?” Eichler Clark said.

The next meeting of the task force is scheduled for October 7, 2020 from 1:00-3:30pm. Check the task force website for more information on how to participate.