Posted by Citizens Utility Board of Michigan 0sc on October 15, 2021 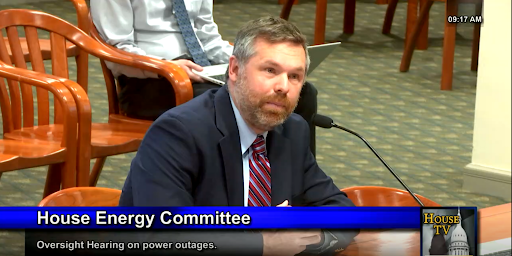 The political investigation into Michigan’s problem of frequent power outages and what to do about it ramped up with a state House Energy Committee hearing on Oct. 13 in which representatives from both sides of the aisle voiced dissatisfaction with the job done by Michigan’s investor-owned utilities.

The questions representatives asked of the hearing’s only witness, Michigan Public Service Commission (MPSC) Chair Daniel Scripps, hit upon the need for new policies that make the utilities accountable for their service performance, as CUB has been advocating in reports, blog posts, interviews, social media and testimony before Michigan regulators.

“How can we explain to our constituents why the Public Service Commission continues to allow for drastic rate increases, but we also continue to see far less reliability?” Rep. Pat Outman (R-Six Lakes) said in the hearing. Based on federal data, residential rates have gone up 17% on average across the U.S. since 2008, but up by 52% in Michigan in that period, Rep. Outman pointed out.

Right now, Michigan consumers have little in the way of recourse when their lives are upended by power outages. CUB has been calling for reforms in the bill credits that are offered to customers who experience long outages, which, at $25, are far too small.

“$25 is simply laughable in terms of a credit to someone’s bill,” Rep. Mari Manoogian (D-Birmingham) said at the hearing.

Scripps said that the MPSC believes the credits should be changed so they are bigger for longer outages. “We know that a 9-hour outage is not the same as a three-day outage in terms of the food in the freezer, in terms of your ability to keep your medicines cool,” he said. CUB has been advocating for a $2 credit for each hour that a customer is out of power.

Manoogian and other members of the Committee, including Rep. John Reilly (R-Oakland Township), also asked if the Commission is considering a performance ratemaking approach, in which, among other things, the utility would receive financial penalties if it fails to deliver on certain outcomes, such as level of electric reliability. CUB has proposed an approach in which utilities would not be able to charge customers for the costs of bill credits for outages that exceed the median level of reliability performance around the nation.

“If they can deliver on improved performance, I am open to saying ‘yeah you can earn something,’” Scripps said. “But if you fail to deliver, there has to be some sort of stick there too.” The MPSC’s MI Power Grid initiative is “really trying to tie some business model considerations with the outcomes customers are looking for,” he said.

The hearing also touched on the inequitable impacts of poor reliability. When the power goes out, “it hurts the poor more than anything,” Rep. Reilly said, noting that people of less means cannot afford backup power sources. “This is an attack on the poor, and it needs to be addressed.”