MI Power Grid Update: How You Can Help Get Better Electric Service in Michigan 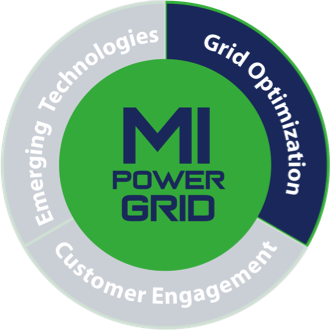 Amid mass power outages this past summer in the DTE and Consumers Energy service territories, tens of thousands of Michigan residents learned the hard way that the state badly needs to update its basic standards for electric service. Also, after more recent power outages, DTE COO and President Trevor Lauer recognized in a Dec. 31 interview that “we need to do a better job keeping lights on for our customers.”

The outages underscored the point, made by the Citizens Utility Board (CUB) of Michigan in our study released last summer, that Michigan has relatively poor electric reliability compared to the rest of the country.

Most Michigan residents probably don’t even know that the state has standards that entitle them to a credit reducing their electric bill if they lose power for a minimum amount of time – such as over 16 hours under “normal” grid conditions.

But these standards are outdated and lack clear enforcement mechanisms, meaning that the vast majority of Michigan residents never receive the compensation to which they are entitled. CUB has outlined suggestions on how to improve the standards, most recently in comments filed with the MPSC.

A positive sign came when Gov. Whitmer and the Michigan Public Service Commission (MPSC) announced that they would update “regulations to improve customer service and reliability” as part of the MI Power Grid initiative.

Right now is an opportunity for Michigan residents to give their input on how the regulations should be updated. The MPSC staff has convened a workgroup that is examining potential changes to the service quality standards that set, among other things, how long your power can be out before it is deemed an unacceptable level of service, as well as the technical standards for electrical safety, meter reading and other standards related to electric system infrastructure.

With its comments, CUB intends to kick off a conversation about how the standards should be improved, ahead of the next meeting of the workgroup on Jan. 8.

If you want to comment as well, you should know that the MPSC staff is proposing, among other things, that customers who lose power for what the state deems to be unacceptably long periods of time should qualify for a $50 bill credit, up from the $25 credit for which they are currently eligible. In addition, the staff proposes that utilities issue these credits to customers automatically, rather than the status quo in which the onus is on the customer to pick up the phone and ask for the credit.

These recommendations are a start, but are far from enough, in CUB’s opinion. There are at least two major issues that Michigan customers can comment on in an effort to improve the staff recommendations.

First, while doubling the size of the credit would be a positive step, the staff’s proposal would still illogically offer customers the same credit regardless of how long their power is out. If your power was out for 100 hours, you get the same credit as someone whose power was out for 16 hours. CUB went into more detail about this problem in comments filed on the MPSC’s Final Statewide Energy Assessment.

Second, the staff appears to be unsure if the “smart” meters DTE has spent millions installing are capable of issuing automatic credits. “We feel with the new technology, with the [advanced metering infrastructure] meters, we feel it might be a possibility for the utility to give the customer that information instead of having the burden on the customer to keep track of that information,” an MPSC staffer said during a Dec. 3 meeting.

It is not clear, however, why there is some doubt over whether smart meters can issue bill credits automatically. One of the advantages of smart meters is that they simplify billing, allowing the utility to electronically record your kWh usage and automatically calculate your bill. If they can record how much a customer should be billed based on energy usage, it seems logical that they can also record a negative amount to be billed – ie, a credit. The Citizens Utility Board of Illinois says that in Illinois smart meters have made it possible to give credits to customers based on time of use.

Automatic credits should be a given, not a goal. It should not be the customer’s job to ask how much he or she is owed when the utility already has all the data that shows if the customer is entitled to a credit – such as how long their power has been out.

Let’s be clear, as well, that it is not just DTE and Consumers Energy customers who suffer from power outages. Around Thanksgiving, some customers of Upper Peninsula Power Co. in the central and western Upper Peninsula suffered days-long outages and around New Year’s there were over 10,000 customers of Cloverland Electric in the UP without power.

If you want to be notified of what is happening with the effort to update Michigan’s standards, subscribe to the email listserv for the MPSC’s workgroup at the bottom of this page. Express your opinion about what the MPSC should do with the standards by submitting a public comment on docket U-20629 (the service quality standards) or U-20630 (technical standards) to [email protected]