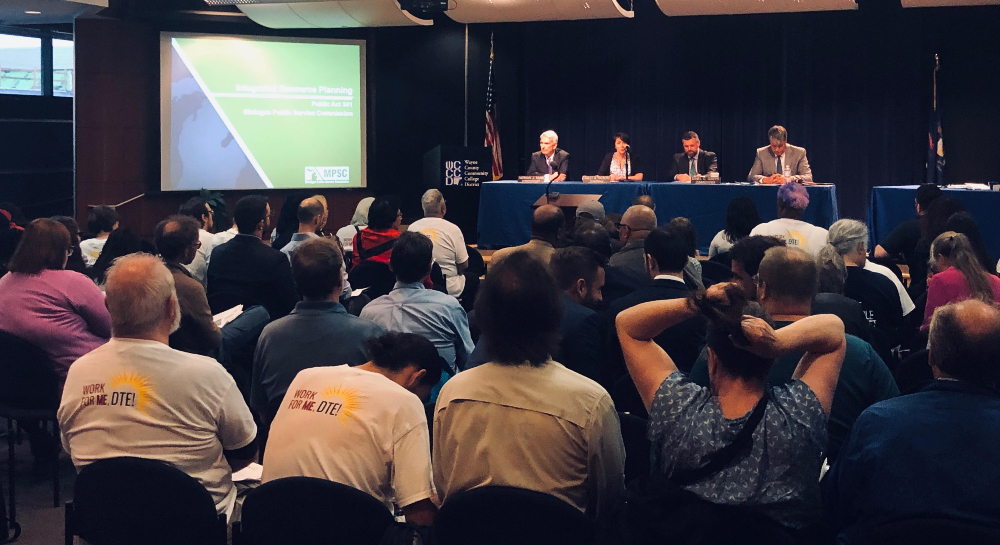 DTE Energy is the only choice of electricity provider for the vast majority of its 2.2 million customers across Southeast Michigan. So it makes sense that so many residents of the area crowded a conference room in downtown Detroit on June 20 for a public forum held by the Michigan Public Service Commission (MPSC) regarding DTE’s integrated resource plan, the utility’s long-term plan for the mix of coal, natural gas, solar, wind, energy efficiency and other resources it will use to produce energy for its customers.

For these residents, their energy future is in the hands of DTE. When the MPSC recently held a public forum on Consumers Energy’s IRP in Grand Rapids, only about a dozen people showed up, MPSC Commissioner Norm Saari said at the forum. But the attendance at this forum beat that many times over, forcing the public comment period to go long, as MPSC Commissioner Dan Scripps noted on Twitter.

The vast majority of DTE customers who attended the forum were opposed to the plan, and said so in a public comment period when they were able to speak directly to the commissioners.

A common sentiment was that DTE is proposing investing billions into utility-owned electric generation facilities, while ignoring alternatives that would be cheaper for customers – like making it easier for customers to install their own solar panels.

“I’ve watched homes benefit from solar panels – that I can’t afford,” one Detroit resident said. Meanwhile, DTE is asking for regulators to sign off on spending that will lock its customers into paying for its infrastructure for many years to come. That burden will be felt the most by low income customers and those in fragile circumstances, like the elderly.

“We are concerned with the extent of DTE’s request for pre-approval of expenses associated with its Plan, some of which do not meet the statutory purpose for pre-approval,” CUB of Michigan President Robert Nelson said in his comments submitted to the MPSC.

Through 2024, DTE’s IRP says that the “most reasonable and prudent course of action” is to retire the Trenton Channel and St. Clair unit 7 coal-fired plants in 2022, St. Clair unit 1 in 2019, switch unit 3 at the River Rouge plant from coal to natural gas and build 693 megawatts of wind energy and 11 megawatts from “solar plus storage” pilot projects.

The shift from coal to renewable energy is in line with a national trend as coal-fired power plants have become less competitive and wind and solar have become more cost-effective. But the way that DTE is proposing to add more renewables seems more focused on what is best for shareholders rather than ratepayers. The vast majority of that new renewable power capacity will come from primarily wind farms, and some solar farms, that DTE will build and own itself. Those projects then allow DTE to charge customers for a return on the capital invested.

But one of the biggest advantages of renewable energy is that it does not have to come only from large, centralized, utility-owned power plants. Rooftop solar, for example, not only allows average ratepayers to cut their own bills by generating their own power, but in large numbers rooftop arrays provide distributed points of generation across the grid that can delay or make unnecessary expensive utility infrastructure.

The MPSC will be considering the IRP for the next several months. You can follow the case and see how to submit public comment at the MPSC website under case number U-20471.