Posted by Citizens Utility Board of Michigan 0sc on April 02, 2021 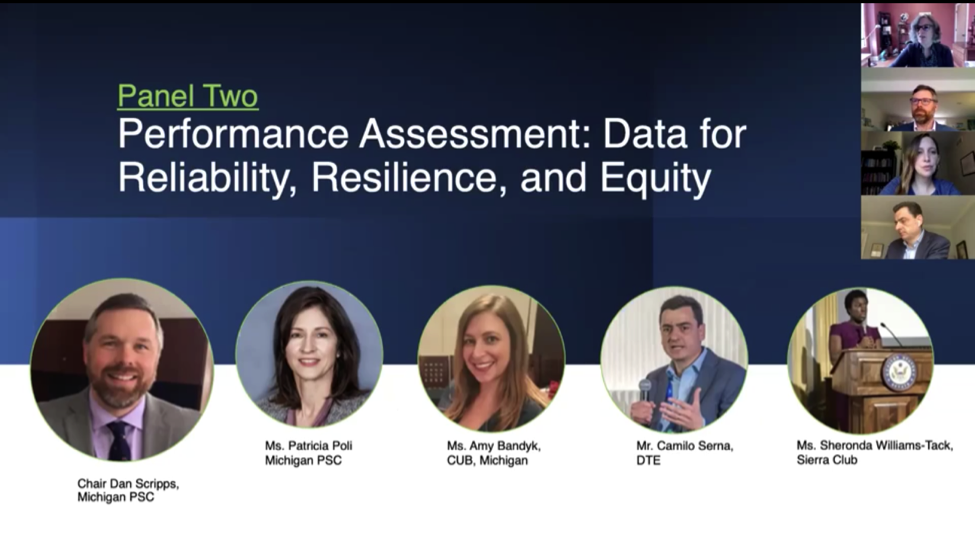 Michigan regulators can confront two of the biggest challenges for energy consumers—poor electric reliability and the inequitable treatment of low to moderate-income customers—through data-driven changes to the way utilities are regulated, Citizens Utility Board (CUB) of Michigan Executive Director Amy Bandyk said March 26, speaking on a panel at the 16th Annual Michigan Forum on Economic Regulatory Policy, a conference held by the Michigan State University Institute of Public Utilities (IPU).

The point of the forum is not just to explain how to address these problems, but to make sure the message is heard by those who are in the best position to create change. The IPU forum featured panels hosted by each of the three commissioners on the Michigan Public Service Commission (MPSC), and is designed specifically to be heard by “the Michigan State Legislature, the Offices of the Governor and Attorney General, consumer and environmental advocates, utility industry representatives, and others interested in Michigan regulatory policy,” according to IPU.

In her panel on “Performance Assessment: Data for Reliability, Resilience, and Equity,” moderated by MPSC Chairman Dan Scripps, Amy summarized the findings from CUB’s ongoing Utility Performance Reports, showing that Michigan utilities lag the rest of the country on key reliability metrics such as the average length of time it takes to restore power to customers following an outage.

But while this poor reliability performance occurs statewide, she emphasized that the harms fall hardest on lower-income residential customers. “CUB's work... is about people's everyday lives,” Amy said. “Basic services such as power are not just about convenience and comfort—people's lives depend on power.” Another panelist, Sharonda Williams-Tack, associate director for Environmental Justice and Community Partnerships at Sierra Club, talked about how negative impacts of our energy system, including not just worse reliability but also air pollution, are disproportionately experienced by black residents. Michigan also has one of the highest economic energy burdens for black households in the country, behind Wisconsin, she said.

Because they suffer the biggest losses from poor reliability, low to moderate-income residential customers also stand to gain the most from improvements in electric utility service. Amy gave a high-level overview of CUB’s recommendations for policy changes that would push Michigan toward performance-based regulation, in which utilities would be subject to financial penalties if they do not perform up to par on national reliability metrics. These recommendations are discussed in more detail in CUB’s March 2020 report.

Representatives of the MPSC and Michigan’s largest utility, DTE Energy, were also on the panel and also recognized that Michigan needs to improve reliability. Patricia Poli, director of the energy operations division in the MPSC, talked about how our reliability challenges are rooted in a lack of upgrades made to the distribution grid in Michigan over time, leaving crumbling infrastructure in place. But the commission is actively working to modernize its approach, Poli pointed out. Through the MI Power Grid initiative, the commission is updating its technical standards for things like meter reading and the ease with which rooftop solar and other distributed resources can connect to the grid without negatively affecting reliability, she explained.

“We have a ways to go” on several reliability metrics, Camilo Serna, vice president for regulatory affairs at DTE, said. The utility is trying to improve that performance through smarter use of data, he explained. With the relatively recent rollout of advanced, “smart” meters, DTE now has access to much more data that it didn’t have even five years ago, according to Serna. One of the most important areas where the utility and regulators now have significantly more data than in the past has to do with momentary outages—when the power flickers, for example, which is an issue that can badly disrupt electronic devices. DTE now can use data to figure out which customers and which parts of the grid have the most momentary outages, Serna said. The MPSC is developing methods for collecting information in areas that have the worst reliability metrics, which would help utilities “prioritize work in those areas,” according to Poli.

Another panel in the IPU forum touched on two ongoing initiatives to watch that could lead to further progress on the quality of utility service. In a panel on “Consumer Protection: Data Uses, Privacy, and Security,” moderated by MPSC Commissioner Tremaine Phillips, Jake Thelen, specialist in customer service compliance at the MPSC, talked about how the commission will soon be making public an electronic dashboard with data that has been collected on energy affordability and accessibility since the pandemic began. That data can be very helpful in figuring out how to expand and reform protections for low-income customers.

Second, Ben Dueweke, director of community engagement at Detroit-based energy efficiency services provider Walker-Miller Energy Services, talked about a Detroit city project he is involved in to gather data from buildings over a certain size in the city in order to understand their efficiency performance. Increasing energy efficiency in old, often neglected buildings is a necessary step to address inequities in energy burden. Other participants in this panel were Connected Nation Executive VP of Government Affairs Brent Legg, City of Grand Rapids Sustainability and Performance Officer Alison Sutter and MPSC Smart Grid Section Manager Patrick Hudson.

The newest MPSC commissioner, Katherine Peretick, also hosted a panel that talked about concrete ways that data can unlock opportunities for the integration of distributed energy resources like renewables and battery storage. Some states, like California, have formal policies in place for the release of anonymized data about building energy use to third party researchers, explained Soren Anderson, an associate professor in MSU’s Department of Agricultural, Food, and Resource Economics. The result has been an “explosion” of research based on California data on subjects like the economics of rooftop solar and how different utility rates affect the adoption of rooftop solar arrays, he said. Policymakers in Michigan could use data like this to increase the amount of distributed energy on the grid, as Peretick, Anderson, Michigan EIBC President Laura Sherman, MPSC Public Utilities Engineer Joy Wang and Consumers Energy Executive Director of Electric Planning Richard Blumenstock discussed on the panel.